Born in Rechytsa, Belarus, in 1937, Isaac Shustin lived and worked in Votkinsk as a lawyer. He immigrated to Israel in 2007 and lives in Migdal-ha-Emek. He has a son, a grandson, and a granddaughter.

I was born in the Gomel region in the town of Rechytsa. I had two sisters, one born in 1930 and the other in 1932. My mother was a dressmaker; my father was a cobbler.

When the war started, I was four years old. Father was immediately drafted into the Labor Army, as he was an older man. I remember how my mother grabbed the two older kids and, carrying me in her arms, ran to the River Dnieper. We boarded a barge and floated somewhere along the river under an aerial bombardment. Then we walked for a long time along with other refugees; I saw bombed-out houses and dead bodies. Then we traveled by train. At the Zolotukha station the train was bombed, and my mother managed to throw the three of us out of the burning car into a ditch and then jumped off herself. She was wearing a voluminous black skirt which she spread over the three of us and said that now the bomb would not hit us. And indeed, we survived.

I will never forget the sight of green grass burning – a big, blazing fire. To me, a kid, it was amazing!

Then we found ourselves in the Stalingrad region, and then we walked for a long time across the Kalmyk steppe, passing the salt lakes Elton and Baskunchak along the way: I remember the great piles of salt in the lakes. I remember also a bombing somewhere near Stalingrad; we hid in a bunker.

One day we were waiting for a ferry to cross the Volga at the Nikolsky crossing. And then the bombing started. However, we were spared by G-d and survived. And so we sat around the campfire on the river bank. I was so hungry, I could not even stand up from hunger. And then Mother got up and headed for the tall stand of grass along the bank. I was scared to be without her, and somehow I got myself up and trudged off after her, trying to keep her in view. And I saw a soldier standing waist-deep in the water with his hands outstretched. Mother looked around her, waded into the water and took something from his hands. I remember the horror that flashed through me as I realized that the soldier was dead. I decided to run and made it back to the fire as quickly as my legs would carry me. My mother came back, a piece of bread rusk the size of a matchbox in her hands. She said that a kind soldier had given us this piece of rusk from his knapsack, so that we would not die. Many years later I told my mother that I had seen it all and she said that it had been exactly as I described it, and she was very surprised that I remembered it.

And then there was another crossing of the Volga. I remember that a thick rope was stretched from one shore to the other, and people were pulling on it to move the ferry forward. Beside us, military officers in tall caps were crossing the river in boats. Suddenly, airplanes swooped down and bombed the boats. For a moment, there was nothing but crashing noise everywhere and the screams and crying of people. When all was quiet again and the smoke had cleared, I saw a lot of military caps floating in the river. My mother said that all the boats had been bombed and all those officers had been killed.

When we wandered around the Stalingrad region, my head was full of lice, and people would not let us into their houses for fear of typhus, which was widespread at the time. One day, a one-armed soldier came up to us and asked my mother why she was crying. When he learned what had happened he went into a house, and we could hear him talking to the lady in a raised voice. After a while the soldier came out, took me by the hand and led me into the yard, where a tub of hot water and a piece of soap had been set out. He washed me and took me back to my mother.

We spent a long time wandering around the Saratov region and then the Perm region. Finally we reached the village of Morozov in the Ochersky district of the Perm region. All this time we did not know anything about Father. All the letters that my mother wrote to various authorities always received the same answer: “The referenced individual does not appear in our lists of dead and missing persons.” In 1945, we got a message from the city of Votkinsk in the Udmurt Republic saying that my father was alive and residing in that city. It turned out that he was only a hundred kilometers away! Father came and took us to Votkinsk, where we stayed on after the war because our house in Belarus had been destroyed. We lived there until we moved to Israel…
In Votkinsk, we experienced many things: hunger, lice, constant humiliation — not only from adults but also from children, who called us yids and said that it was our fault that Hitler had attacked. And this went on for many years. 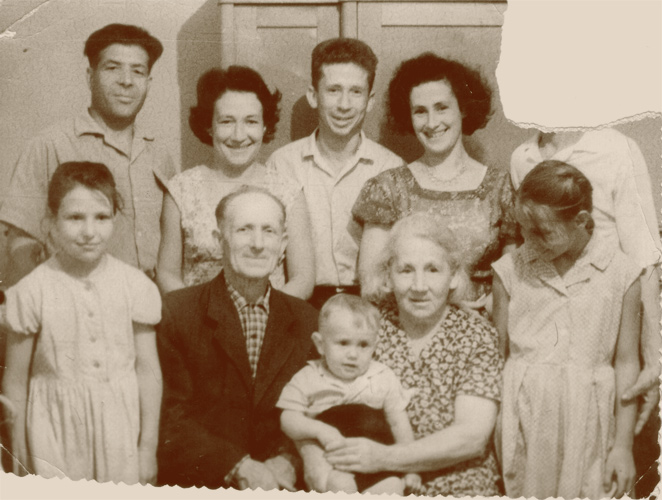 The Shustin family, 10 years later. Isaac, 21, is in the center, top row. His sister Dveyra, who has two daughters, is on his left, and his sister Zelda, who has a son, is on his right. Votkinsk, 1958

To this day, I do not let myself or my family throw even a crumb of bread away: the cost of it has been deeply etched in my memory. I doubt that I have had to endure that much more than other people – although it was not every child who had to see his mother taking bread from a dead man’s hand before his very eyes in order to save her children from starvation, or throwing her kids, screaming in horror, down the slope from a burning train car.

Of course, my memory retains many other things besides those I have described here.